We had our first appointment at the Down syndrome clinic last week. It didn't start off like a good day. The drove from our home takes 1 hour and 20 minutes. At an hour and a half, we were still an hour away. It was raining and therefore there were wrecks. There was one wreck that really put us behind. I called the numbers provided to the people to schedule appointments as that was the only numbers in the packet of information. Now our appointment was with the neuro-developmentalist. But it was with the Ds clinic. I had to leave a message on the first voice mail. A lady answered the other number and wanted to know where I got their number in relation to Dr. _____. Except she said it really snotty like "and you got this number from where?" I told her it was in the packet of information they sent me for this appointment. So someone called me back a little later and said the doctor said to come on but we would have to wait to be fitted in. So we trecked on. For about 45 minutes we were traveling 20-25 mph on the interstate. By this time, we had met commuter morning traffic. We were stop and go and 25 mph. If any of you have ever ridden with me, you would understand how horrible this was to me. We finally arrived an hour after our appointment and had to wait 1 hour and 45 minutes to be squeezed in. But a foster parent and a licensing worker/foster care worker were at the hospital for another clinic. Its always good to see faces you know. I saw several cuties sporting the extra chromosomes come in and out. They all walked in waving like they knew everyone was expecting them. But another thing I noticed was a common phrase from all the parents...."gentle." Apparently hitting is not just an institutionalized thing but a Ds thing. I spoke with one mom about this and she said yes. Also, Brigita was not the only runner. Several of us had to take off after our little ones. After one doctor examined Brigita and talked with me a bunch, she and the doctor we were there to see consulted and then met with me and Brigita. They said that although Brigita has many autistic behaviors, she is definitely not autistic. They said she needs speech therapy (which I knew) and some behavior modification (which we're working on). Follow ups with the specialists we have already been seeing and school assistance and therapies. He said Brigita's GI is one of the bests! And he said that we are doing everything right and that she is doing fantastic. She has good muscle tone and this is getting better as she becomes more active. So, unless there is a problem, we do not come back for a year. Oh, the doctors were also impressed with how much she vocalizes. I guess I hadn't really thought about that too much, but Brigita does make a lot of noises and sounds. This weekend I think she started talking back to me LOL! I wouldn't let her do something so she stormed off down the hall, making a noise while throwing her arm up in the air and stomping one foot. She did it again this morning when she didn't get her way. I suppose I shouldn't think its cute but it was cute. She is also dancing more and more. She likes ballet. Still waiting to get a court date but also planning her BIRTHDAY PARTY!! February 5th, Brigita will be 8 years old!! I'm so excited. I had a celebration for her last year and prayed that would be her last birthday in her institution. Although her adoption is not finalized, God still granted my wish! I am so thankful and love this little girl more than words can express. 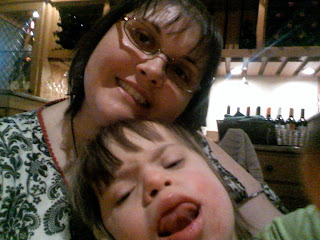