Sorry for the delay and not blogging while in country. We didn't even bring the computer since I had so much to carry and take care of Darya as well. In addition, we didn't have internet at the apartment and the connection at the café wasn't that good.
As most of you know, Darya is from Latvia, a very old country on the Baltic Sea that used to be a part of the USSR. I'll do a post about Darya's life in Latvia, where she has lived, and our times in country later.
But for now...this was the best trip yet! Darya and I went alone. She does NOT sleep on planes. She loves take off and landing. She laughs and laughs. Its so cute. The lack of sleep really sucked on the way there as it was throughout our regular nighttime. Plus her tummy was having issues (again). But she did great. After every plane ride on the way there, people commented on how well she did. She was so exhausted. She only slept for 30 minutes and that was while I was holding her. But I couldn't do it for long b/c I started having major back pains. We left our home around 8:30am and arrived in Latvia at what would have been 4am our time. We were both pooped! Darya passed out around 6pm and I followed about an hour later. We slept til 3am, at which time she wanted to eat. We hung out til 5am, then went back to sleep until 10:30am. It was great. While Darya was eating her 3am breakfast, she started signing "home." Broke my heart. I told her no but that we would go home soon. 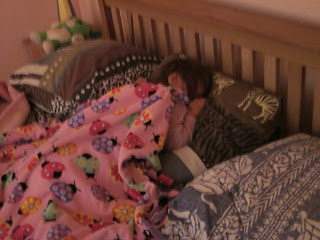 Our apartment was great and in a great location in Riga. We had a full size gas stove! No hot plates! Our own washer. Close enough to Old Town Riga that we could walk (and did once) to it but the tram stop was a couple of blocks away and we were there in 2-3 stops, depending on where we wanted to go. Riga is beautiful!
After a wonderful day of rest, a play at the park, and picking up some groceries which was also just a few blocks away, we woke on Monday to get Darya's new passport and her medical for her Visa. The in-country agency contact was on their game. Darya's passport was already ordered by the attorney using one of Darya's old pictures (one I don't have by the way) and so all I had to do was sign some papers and we were done. At the medical, the doctor was very impressed with how much Darya had progressed and the discovery that her diagnosis was hearing impairment and celiac disease was incorrect. She asked permission to use Darya's information to develop a presentation for the doctors that oversee the orphanages about the importance of proper diagnosis on development (since they thought Darya was basically deaf, they didn't speak to her, for instance) and the potential of children with special needs, even the more severe needs. I, of course, said yes.
After the medical, we contacted the Embassy to see if we could do our exit interview on Monday since we had everything. Our appointment was scheduled for Tuesday. They said come one! So we did. Everything went well, despite the fact that our I94 had expired. We were granted the Visa and picked it up on Tuesday. So, I could have gone home on Wed. but it cost too much to change our tickets. So, instead we just hung out in Riga. We had a great, laid back time. 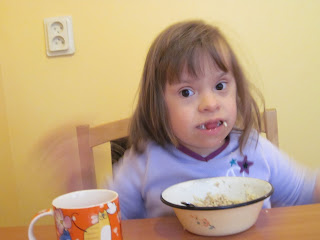 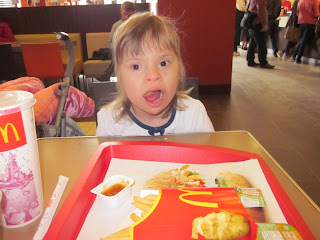 Big girl eating at McDonald's. She even fed herself. Generally in public (esp. a loud place like McD's), Darya refuses to feed herself. But she ate 3 nuggets all by herself. 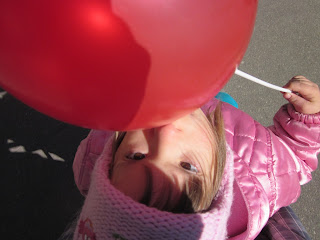 This balloon was the biggest hit. I took it from her to get her on the tram, and she fell into an immediate tantrum. It was kinda funny and kinda not since we needed to hurry. ﻿

We ended up getting round trip tickets under Darya's Latvian name and I was nervous about how this would work since her passport and Visa were different names. But we had no problems with this and saved $900. By the time we got home, we had been traveling for 25 hours. It was nearly 10pm our time and 5am in Latvia. Darya had finally fallen asleep in the car (she only slept 1 hour on the plane and that was with Melatonin) but woke up when we got home. I put her to bed but she quickly got out and was so excited to be home. She kept walking from room to room and laughing and giggling. She tried out some of her toys, bounced on our couch, and then wanted to eat. I had brought instant grits to Latvia that was butter flavored but they were salty. Darya eats her's with butter and sugar (like she had at Kalkuni). When I pulled out the grits container, she had a look like "finally, mama, you got the right ones." She gobbled it up and then proceeded to laugh and giggle some more. 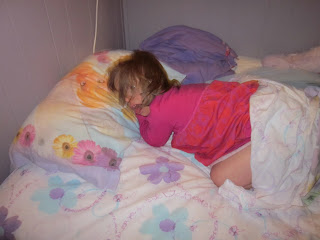 Too tired initially to even let mama change her into her PJ's, though she did let me change her diaper. 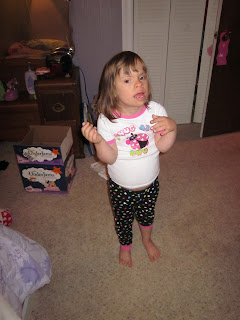 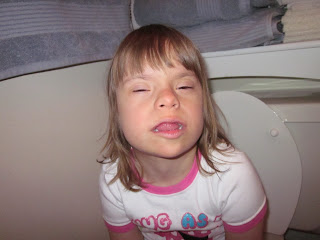 She was so tired her eyes actually looked like this all the time. She couldn't hold them up for nothing but kept trying to stay awake.
I have some more pictures that I can't get to right now and I'm also sleepy.
More later...
﻿
Posted by Dee Etheridge at 7:31 PM